I’ve already built out the ESG that will serve as my DHCP server, check out my ESG Basics post for configuration steps, this post will focus solely on configuring the DHCP service on an existing ESG.

To configure DHCP, go to the ‘Networking and Security’ pane in the vSphere web client, then go to ‘NSX Edges’ and double click on the Edge instance you wish to configure DHCP on. Select Manage > DHCP:

END_OF_DOCUMENT_TOKEN_TO_BE_REPLACED

Deploying an ESG (Edge Service Gateway) starts off in the same way as a DLR (see my DLR basics post). The ESG is the next layer above a DLR and acts as the perimeter to the “real” world. The ESG provides tonnes of functionality and this is were I found the biggest leap from being a traditional VMware infrastructure (think vCenter, ESXi, VSAN, dvS, dvPortgroups, VMs etc. etc.) to becoming an SDDC engineer.

The ESG can do the following (I’m hoping to break all these functions down into posts over the next few months):

In this post I will step through the basic deployment steps of a Distributed Logical Router (DLR)… but first what is a DLR?

NSX provides the ability to do traffic routing (between 2 separate Layer 2 segments, for example a VM on 192.168.0.1/24 and a VM on 172.18.0.1/24) within the hypervisor without ever having to send the packet out to a physical router. For example, if the application server VM in vlan 101 need to talk to the DB server VM in vlan 102, the packet needs to go out of the vlan 101 tagged port group via the uplink ports to a Layer 3 enabled physical switch which will perform the routing and send the packet back to the vlan 102 tagged portgroup, even if both VM’s reside on the same ESXi server (this is referred to as “hairpin” traffic).

This new ability to route within the hypervisor is made available with DLRs and ESGs (Edge Service Gateways, which we will cover in a later post):

Let’s get down to the coal face… Web Client > Networking & Security > NSX Edges, once here click the green cross:

END_OF_DOCUMENT_TOKEN_TO_BE_REPLACED

Every time you create a Logical Switch you are creating a VXLAN, a great way to think about the power of a Logical Switch is to consider how much time and paperwork is required to add a new VLAN to ESXi hosts (in a large enterprise this can take days). With NSX I can now do this in minutes.

END_OF_DOCUMENT_TOKEN_TO_BE_REPLACED

Next up is creating a Transport Zone! Transport Zones are a way to define which clusters/hosts are be able to see and participate in the virtual network that are being configured. Its like a container that houses NSX Logical Switches along with their details which is then assigned to a collection of ESXi hosts that should be able to communicate with each other across the physical network infrastructure.

To configure a transport zone click on the Transport Zones sub-tab, then click the green plus button to add a new transport zone.

Now the hosts are prepared it’s time to build the logical network and the control plane for NSX between the cluster resources and the controllers. Sounds complicated! To accomplish this we need to  configuring VXLAN for the corresponding ESXi clusters, which will create VTEP interfaces on the hosts.

Start by navigating to the Web Client > Networking & Security > Installation > Host Preparation. Now that the cluster has been configured for NSX and all hosts show a status of Ready, the option to configure VXLAN becomes available. Click on the Configure link under the VXLAN column for the vSphere cluster.

END_OF_DOCUMENT_TOKEN_TO_BE_REPLACED

Ok… It’s now time to create Segment IDs and this is one of the many huge advantages of SDN! In a way, you can think of these like VLANs for VXLAN … except you can have 16,777,216 of them.

Segment IDs will form the basis for how you segment traffic within the virtualized network. Although it is technically possible to use values between 1 and 16 billion, VMware has decided to start the count at 5000. This was done to avoid any confusion between a VLAN ID, which range from 1 to 4094. Quite a sensible approach!

Click on the Segment ID sub-tab and then click on the Edit button. In my lab, I’ve chosen to use the range 8000-10999 giving this environment 2999 VXLANs.

After you have installed your NSX Manager and created the NSX Controller cluster, the next step in the process is to prepare the ESXi hosts! This post is the next in my NSX series and will cover NSX – Host Preparation!

I’ve chosen to prepare my cluster below, which consists of three ESXi 6.0 hosts. Navigate to the Web Client > Networking & Security > Installation > Host Preparation. Choose your NSX Manager (I have two vCenter each with a NSX Manager) then select the cluster and click the Install link.

END_OF_DOCUMENT_TOKEN_TO_BE_REPLACED

It’s beta time! Get your voice in and shape the direction of #vSphere 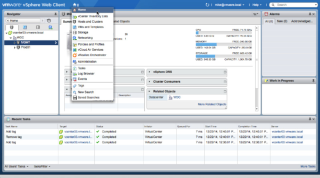 It’s beta time! Get your voice in and shape the…

Getting started with Photon OS and #vSphere Integrated Containers (via CormacHogan.com) 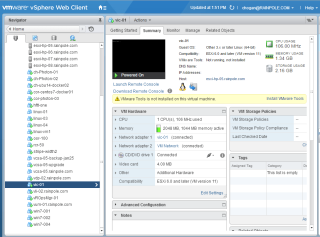 Getting started with Photon OS and vSphere…

There has been a lot of news recently about the availability of vSphere Integrated Containers (VIC) v0.1 on Gtihub. VMware have being doing a lot of work around containers, container management and the whole area of cloud native applications over the last while.